As I sit here wheeling and dealing I’m reminded of a curling iron and a Christmas many years ago.

Stuart and I spent our weekend emptying out the contents of two storage units that he won. 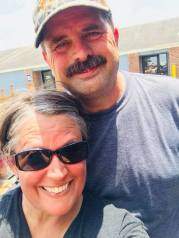 Yep, just like Storage Wars on A&E, well kind of. There are a few stark differences. First, there were no TV cameras. Second, it was a silent bid versus all of the drama portrayed on the show. Lastly, we cleaned the lockers out all by our lonesome. We had no crew and no fancy moving truck. Just us, a red chevy and a borrowed trailer.

We have a trailer but it didn’t suit for a job of this magnitude.

I have never forbid Stuart to do anything, until today! Hence forward, he is no longer allowed to bid on any units. What is it about men and tools? I see the value in them but holy cow! This locker was a mess! 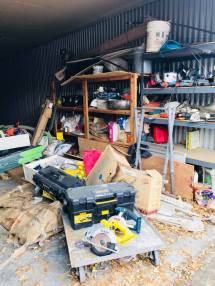 And I can’t for the life of me figure out why he would bid on a locker with multifarious clear plastic bins bulging with Christmas decorations!

IF, we tackle this feat in the future, momma’s in charge!

As I said in the beginning, before I got to ramblin’, my memory has been nudged out of dormancy by the acquisition of our new found treasure trove.

The third Christmas in the The Love Shack, if made into a Hallmark Movie would be dubbed “Humble Beginnings, To Say The Least.” Money was tight. Corey was now three. He was very aware of Santa, presents and the likes. All we wanted was for Corey to have a good Christmas. Ya know, lots of gifts under the tree from momma and daddy. More gifts and a full stocking from Santa. The problem? Money was tight.

We had a credit card and a Toys R Us nearby.

Hand in hand, Stuart and I strolled through the store “where a kid could be a kid” filling our cart with items we were sure Sparky would covet for years to come. We made our purchases and strutted to the parking lot as we bragged about the things he was going to fall in love with.

Each present was wrapped with tender loving care and placed under the tree. Well, except for the ones reserved from Santa.

Christmas morning arrived and Corey had a ball but for me it was sort of anticlimactic. He acted like a typical kid. Opening one, moving frantically to the next with a heart full of anticipation. I am not sure what I expected.

It came time for Stuart and I to exchange gifts. I can’t for the life of me remember what I got him but I sure remember what he got me. I’m ashamed to share the next part of this story with you but not because of what I was gifted.

He got me a curling iron! A twenty dollar curling iron. My face has no filter. I tried to make out like I was appreciative but my face, oh my face. I now realize that curling iron was quite possibly one of my most precious gifts to date. Don’t get me wrong, Stuart is an awesome gift giver but the sentiment behind the curling iron hurls it to the top of the list.

At some point, he heard me mention that I really wanted a such and such brand curling iron. Money was all but obsolete yet he purchased that heated wand of wonder for his “Booger.”

For years I have been giving him crap about that curling iron being the worst gift that he ever gave me when in fact, it was priceless.

We spent countless dollars trying to keep up with the Jones’s, making sure that our boy had a good Christmas. We bought his short lived merriment on loan with a MasterCard. A practice that we were against but felt pressured to utilize.

I can guarantee you, the cashier had to pry that twenty bucks out of Stuart’s hand. Or maybe he added it to the loan of merriment. I don’t know and he doesn’t remember.

That tightfisted gesture exhibited two sides of my mustached man child. Frugality and his sacrificing nature. These days, I admire those attributes, back then I had no idea that I should. I was young and selfish.

Now back to what got me started on this self deprecating rant to begin with, those two storage units.

Stuart and I have been very thoughtful with the management of our money the latter half of our marriage. Well, he leads and I follow, sometimes kicking and screaming but I do follow. We no longer try to keep up with the Jones’s. Who are those people anyways and why do so many people want to be like them? And we no longer feel the need to quench a fleeting desire with a credit card. We are content. It’s all just stuff.

We do get a kick out of digging through copious amounts of “stuff” just to see what we can find. The time we spent together was priceless. 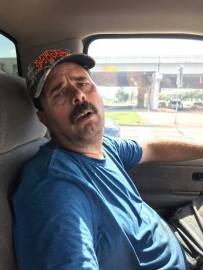 Although both of us nearly died from heat exhaustion coupled with the fact that I can barely move a day later, still priceless.

I guess the point that I am trying to make is that money will make you or break your marriage, although I fear I am doing a poor job conveying my message.

If any youngsters were soliciting advice regarding a happy marriage, at the top of my list would be the following: #1 Don’t feel like you have to keep up with anyone, especially the Jones’s. Those folks get too much acknowledgment as it is. And most certainly don’t use your Facebook friends as a barometer for the norm. Create your own normal. #2 Credit, although a necessary evil of sorts should be used sparingly and not for selfish whims and desires that can wait. The stress of debt will kill a marriage. #3 You have to work as a team. Being like-minded regarding your budget is a must unless you want to live in constant turmoil. #4 Your kids could care less about the “stuff,” give them your time. That, my friends is what they will remember most. Lastly, cherish your curling iron moments.